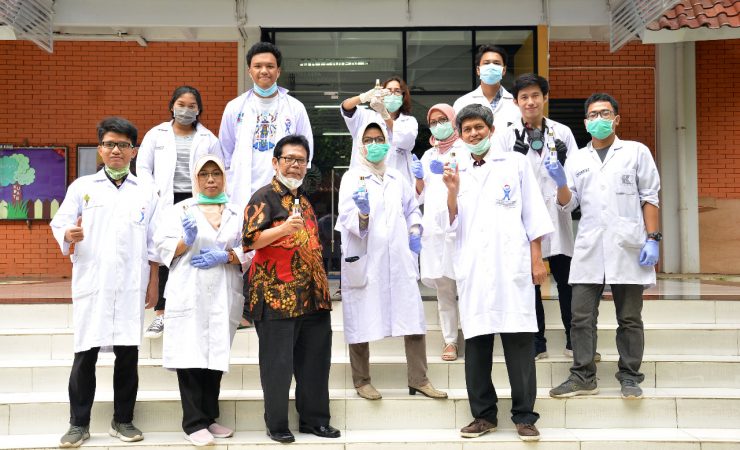 Through the Community Service Program, the Department of Chemistry FMIPA UI collaborates with the Administration Center of FMIPA UI, and the Chemical Student Association (HMD) of the Faculty of Mathematics and Natural Sciences UI produces and distributes hand sanitizers free of charge to the general public around the Depok, West Java.

The Dean of FMIPA UI Dr. Rokhmatuloh, M.Eng. said this activity was motivated by the scarcity of hand sanitizers on the market during the current pandemic COVID-19 outbreak, even though there was a price that was quite expensive.

This community engagement program, he continued, also became one of the service of FMIPA UI in implementing the knowledge of the civitas, accompanied by scientific moral responsibility, so as to be able to encourage the role of the FMIPA UI community, both students and researchers, to contribute to helping solve the nation’s problems.

“This program is a preventive measure that we have taken, given that handwashing liquid is still scarce on the market, so we encourage the FMIPA UI community to take on the role of helping the community by applying the knowledge they already have.” said Dr. Rokhmatuloh, M. Eng.

Until now, production and distribution are still carried out, in accordance with the availability of stock or production targets of 300 Liters. Of this target, only 200 liters have been produced and distributed.

The production target, he continued, is to expand the distribution reach, especially for Hospitals and other Health Care Facilities (Fasyankes) around the Depok city.

The hospitals that were targeted for distribution included the Islamic Hospital in Jakarta, and the Bunda Menteng Hospital.

Regarding what ingredients and formulas are used, he ensures that the Department of Chemistry FMIPA UI has followed the guidelines that have been standardized by the World Health Organization (WHO), taking into account health and environmentally friendly aspects.

Gallery : Department of Chemistry FMIPA UI production and distribution of free hand sanitizers for the Public