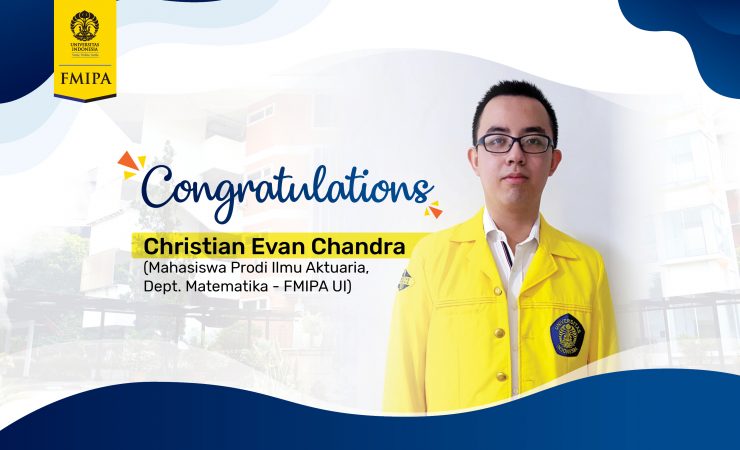 The proud news was received by Cev, as he is often called, through his personal e-mail and also published on the official page of the Casual Actuarial Society on Friday, May 8th, 2020. Thanks to his achievements, Cev became one of the actuarial undergraduate education program students in the Asia Pacific Region entitled get a scholarship.

Cev made a paper titled Electric Cars to Reduce Global Warming in Jakarta: Learning Its Additional Hazards on Motor and Property Insurance. The major theme of the paper is related to efforts to deal with the effects of climate change that occur in participating countries, as well as the participant’s role as an actuary who anticipates possible changes to insurance needs.

Cev tried to formulate the right insurance products to provide protection to those affected by climate change.

Through his writings, this 21-year-old student, poured ideas about the advantages and disadvantages of using electric cars as a solution to reduce global warming in Indonesia, as well as how an actuary prepares appropriate insurance products for electric car users.

“My essay explains the advantages and disadvantages of using electric cars in reducing global warming in Indonesia, especially in Jakarta and how an actuary prepares insurance products for electric car users to benefit both parties. The strengths and weaknesses of this electric car become one of the important factors that determine insurance products, both in price and usage scenarios.” Said Cev in his interview with the FMIPA UI public relations team.

Furthermore, related to the technical instructions for designing the insurance product, along with the price formulation, to the details of the regulation, cannot be explained more deeply because it concerns the confidentiality of data from the insurance company as well as the publication rights to the organizer.

Cev achievement proves that as a student majoring in actuarial science must be critical and have a sensitivity to the things that occur as well as issues that develop both nationally and globally that allow changes in the needs, and business processes of the insurance industry in the future.

“This is my provision to step into becoming an actuary expert who is able to balance global competition in the insurance industry or other fields that rely on the important role of actuaries,” Cev added.

The Dean of FMIPA UI Dr. Rokhmatuloh, M.Eng. welcomed the achievements of these students. He said, “FMIPA UI continues to encourage and provide full support to all outstanding students, both in the academic and non-academic fields.” As an encouragement and motivation to his students, he also guarantees that every student who excels, both at the national and international levels, will receive a special award from FMIPA UI. “For students who get achievements both at national and international levels will get a special award from the FMIPA UI so that students are encouraged to display the highest achievements they have at the events they participate in,” he said. He hoped that the achievements that had been carved by previous students could motivate even more FMIPA UI students to be active in various competitions in the academic and non-academic fields.

ARECA as the organizer is an affiliate of the CAS (Casualty Actuarial Society) which is a general insurance professional association, for the Asia Pacific region. ARECA joins 17 other Regional CAS Affiliates around the world as a provider of high quality continuing education for CAS members.