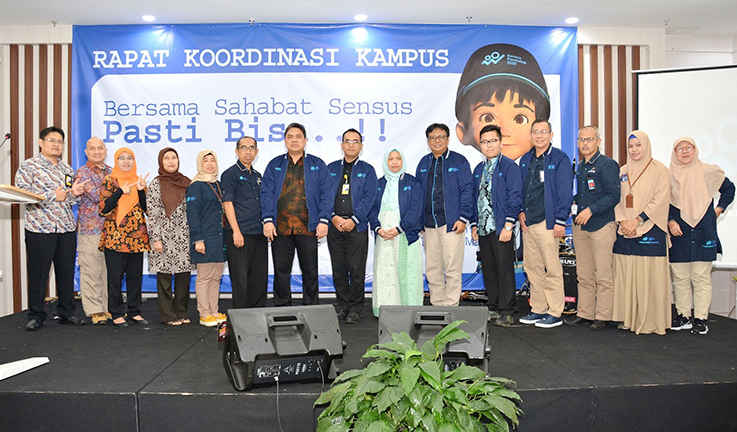 To support the successful implementation of the 2020 Population Census (SP2020), Universitas Indonesia through the Faculty of Mathematics and Natural Sciences actively participated by involving 100 students from the statistical study program as census friends who played a role in increasing the SP Online response rate.

Universitas Indonesia is incorporated into the Indonesian Statistics Higher Education Forum (Forstat). The similarity of knowledge clusters with departments, study programs, or statistics majors is a very strong capital to establish coordination and consolidation, so UI involvement in the implementation of SP2020 becomes very important.

The concrete form of involvement of FMIPA UI is by inviting, guiding, and persuading people in their respective tertiary institutions, families, and surrounding communities through the role of the Census Friends.

As a form of commitment as well as a sign of the inauguration of census friend members to carry out their duties, they were confirmed by saying the Census Friends pledge, and were provided with more detailed knowledge about SP2020, to Fill Together (Ngibar) census online population 2020.

The inauguration was carried out in the activities of the Campus Coordination Meeting (Rakorpus) held by the West Java Central Statistics Agency (BPS) in collaboration with UI today, Thursday (3/5/2020) in the Sinarmas Hall, Lab. Multidisciplinary Research FMIPA UI-PT. Pertamina.

Dr. Agung Waluyo Director of Community Service and Empowerment who on this occasion represented the Rector of UI said, through this collaboration, statistics students at the Universitas Indonesia fully supported SP2020. One concrete step towards realizing this support is that currently 100 students, the majority of whom are undergraduate Statistics, have joined as Census Friends.

“In carrying out their role as Census Friends, 100 students were accompanied by 20 lecturers from the Mathematics Department of FMIPA UI”. said, Dr. Agung.

Furthermore, he said, the enthusiasm of students to join the Census Friends was very high, as evidenced by the growing number of applicants, so that selection was needed to get 100 people with high commitment to succeed SP 2020.

Continuing the statement of Dr. Agung, Dean of FMIPA UI Dr. Rokhmatuloh, M.Eng. In his remarks, ensuring that the Census Friends are ready to socialize and publish SP2020, as an effort to increase awareness and understanding of SP2020 to academic groups/communities /academics. Starting from the simplest thing, namely publication on each social media page.

“Friends of the Census with assistance from lecturers, are also ready to ward off the hoax, if any, usually related to data security and related to the implementation of this SP Online”. he stressed.

He also invited the entire University of Indonesia academic community to contribute to the success of the SP2020 by filling in data independently through sensus.bps.go.id.

Dr. Margo Yuwono as Deputy of Social Statistics of BPS RI in his speech said that the implementation of SP2020 was the first population census conducted with several innovations that had never been carried out in previous censuses.

One innovation is in the field of census methodology, which for several decades using traditional methods, will move to the combined method through the utilization of population administration data from the Directorate General of Population and Civil Registration (Ditjen Dukcapil).

“Indonesia is now entering its golden age, population data is very important so that government policies are not mistaken,” said Margo.

The big objective of SP2020 is to provide data on the number, composition, distribution, and characteristics of the Indonesian population towards “ONE DATA OF INDONESIAN POPULATION”.

With the realization of one population data for Indonesia as the population database, continued Margo, it will be used not only for ministries/institutions (K / L) but also for non-government organizations in formulating policies on target.

“Population data following field conditions, which can present data to the smallest administrative region, is highly anticipated by many parties”. he said.

BPS also gives residents the choice to choose one stage that suits the level of mobility of the population.

“Now BPS provides choices for residents, who want to be online or interviewed,” said Margo.

“For people who have high mobility, we urge you to choose the Online Population Census on this SP2020”. the appeal.