Home / Berita / Jason Kristiano, the only one at UI who graduated with a bachelor degree in 3 years and has international publications

Jason Kristiano, the only one at UI who graduated with a bachelor degree in 3 years and has international publications

Jason Kristiano, the only one at UI who graduated with a bachelor degree in 3 years and has international publications 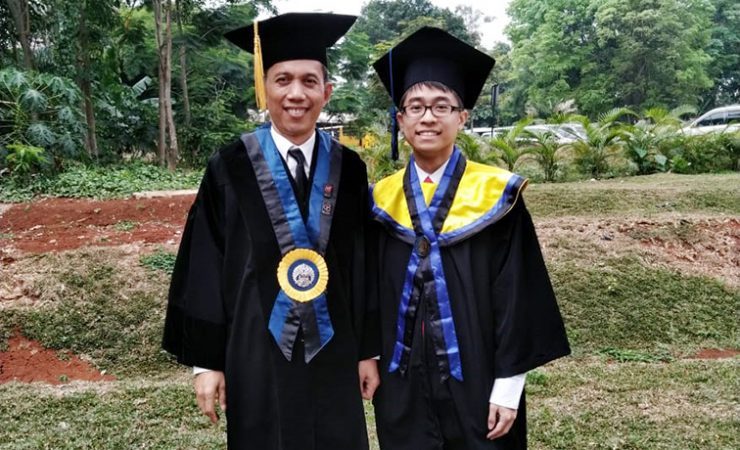 Jason Kristiano is a student of the Faculty of Physics, Faculty of Mathematics and Natural Sciences UI class of 2015 who broke the graduation record with a study period of 3 years in the Physics Department.

In addition, while still a UI FMIPA student, Jason was under the guidance of Prof. Dr. Terry Mart Professor of Physics at FMIPA UI published his thesis research in the journal Physical Review C, the most prestigious international scale journal produced by the American Physical Society. Even a doctoral treatise is not necessarily accepted for publication in the world’s leading journal.

Previously, there had never been graduates at UI who had achieved such achievements that Jason had inscribed. With these achievements, at this time, Jason became the youngest and best graduate of UI.

In his publication, Jason corrected the fermion particle spin theory aided by his senior, Samson Clymton. Samson, who was then a student of the Physics program at the Faculty of Mathematics and Natural Sciences UI, helped Jason in the formulation.

Samson had previously written two treatises in the same journal, and the third treatise was made with Jason. not only cross-checking and correcting Jason’s formula, and Samson also became a discussion partner for Jason.

As a supervisor, Terry Mart said that in physics theory like this cannot be solved alone.

Jason’s love of physics resulted in victories in physics competitions, both at national and international levels. So that achieving glorious achievements as if it has become commonplace for men born 21 years ago.

In a series of achievements he achieved including at the 2014 National Physics Olympiad (OSN) Physics he won a gold medal, then at the Asian Physics Olympiad 2015, he also won Honorable Mention and won first place in the Theory category of the 2015 Pertamina OSN Physics.

Then what is the dream of a Jason with his physics?

Jason revealed he wanted to be a Nobel Prize winner in Physics. Although he admitted the opportunity was small, he was optimistic.

“Moreover, there are no Nobel laureates from Indonesia yet,” he said.

Not only that, but he also wants to pursue a Master (S2) and Doctoral (S3) degree in the United States, a country where many Nobel laureates were born.

Many people admire his ability in the field of physics, when asked what might make Jason motivated to study physics so deeply and how his study tips, Jason replied he began to like physics since he was in high school. He initially wanted to take part in a physics competition. For him to take part in the physics competition to win is the most prestigious thing among students.

Regarding specific tips, he revealed that he did not have them, which he knew he liked physics, even admitted that studying physics all the time was his hobby.

For him, the most important thing is to understand the concept of the material he is learning. When understanding concepts, he can then practice through example problems.

Opinions of many people that it is not easy to learn about physics are also not entirely wrong for Jason. But for him, everything can be learned.

“Many assume that I can immediately get physics, lecture a little immediately understand. But those who think like that don’t look behind them, how do I learn? Every day take the time to study physics, routinely read books, practice questions from books “he said.

Jason also gave a few tips for physics lovers to continue to persevere and consistently study and develop physics.

“So if you want to study physics well, read the book and not only read it, but understand the concept, the formulas come down, and don’t forget to practice the questions,” Jason said.