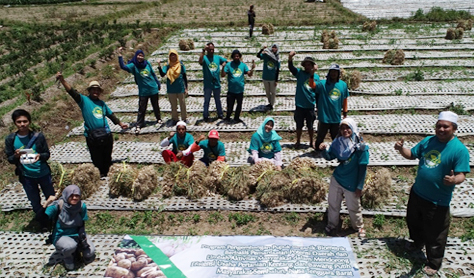 Through the Community Engagement Program (PengMas), FMIPA UI Lecturers and Students in collaboration with the Pandu Cendikia Foundation held training in making liquid organic fertilizer based on local discernment by utilizing the potential of the region (natural materials) and waste products for the people of East Lombok, West Nusa Tenggara.

Natural materials used to produce fertilizer produced by the FMIPA UI community engagement team are coconut water, brown sugar, ginger water, and egg whites. While the waste used is livestock waste such as animal waste, to domestic waste such as rice washing water.

The program is chaired by FMIPA UI Lecturer in Biology Dr. The Retno Lestari was held on 28th  – 30th  August 2019 in Sembalun, East Lombok, West Nusa Tenggara, with support from the Universitas Indonesia Directorate of Research and Community Engagement (DRPM UI).

Retno explained that the background for the emergence of the idea to hold a local discernment-based organic fertilizer production training was because the district in East Lombok district was an area known for its horticultural agricultural products, such as onions, potatoes, and chili.

Much intensification is carried out on these commodities to increase production output. But according to her, the intensification that is mostly done is the expansion of land and the use of outside agricultural inputs such as inorganic fertilizers, drugs, and pesticides, causing several problems including increased production costs, triggering environmental pollution, and land damage.

Retno continued, the earthquake that occurred in Lombok and its surroundings resulted in economic losses, especially in the Sembalun region. Therefore, various efforts were made to revive the economic activities of the community one of them by encouraging horticultural agricultural output.

The team began the activity by conducting research related to the materials used. The research was carried out in the laboratory and the field. Then proceed with the trial phase, up to the implementation phase for Sembalun residents by involving the Loang Farmers group with a total of 163 members.

The manufacturing process by mixing natural materials is claimed Retno can minimize the risk of failure that may occur in the manufacture of organic fertilizer by fermentation, in addition to reducing the waste produced by fertilizer, and converting it into fertilizer that is very beneficial for the people of Sembalun which mostly works as a farmer.

Another plus of this liquid organic fertilizer is relatively cheaper and environmentally friendly production costs. So that it is expected to streamline the agricultural business which until now has become a mainstay business for the residents of Sembalun.

Leo is one of them. A resident who also works as a large red chili farmer revealed that he had tried to use the fertilizer innovation team of the FMIPA UI community engagement team to plant the chili he planted in August.

Until the end of November, according to Leo’s observation, the fertilizer had a significant influence on the chili plants he planted. The difference in chili plants that are given liquid organic fertilizer is visible, including the condition of the stems are stronger and taller, the leaves are greener and fresher, the ripe chili is bigger bright red, and has a stronger survival compared to other plants that are not given liquid organic fertilizer.

“I tried it. it turned out that it had a big effect on my chili plants, the stems were stronger, taller, the leaves were greener and fresher. Survival is also better compared to those not given organic fertilizer. ” said Leo.