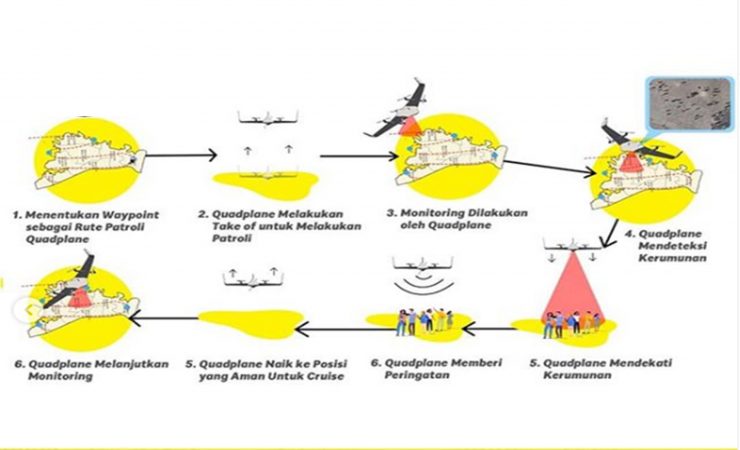 The implementation of distance learning (PJJ) is not an obstacle to making achievements and making innovative breakthroughs for University of Indonesia (UI) students. This was demonstrated by a group of UI students who came from across faculties through the results of a Pilot Unmanned Prototype named the Hybrid Quadplane UAV, which could assist the government in overseeing the implementation of Large Scale Social Restrictions (PSBB). The student team consisted of seven UI students on behalf of Adam Sultansyah (UI Engineering Faculty (FTUI) class of 2016), Ardi Ferdyhana (Faculty of Mathematics and Natural Sciences UI (FMIPA UI) 2017), Cindy R. Muffidah (Faculty of Psychology UI (UI Faculty of Psychology (UI) FPSi UI) 2017), Kevin Yosral (FTUI 2017), Lendi Larici (FMIPA UI 2016), Muhamad Naufal Rianidjar (FTUI 2016), and Viliasio Sirait (FTUI 2017).

Hybrid Quadplane UAV is a vehicle Unmanned-aircraft Vehicle System (UAV) or unmanned aircraft that combines fixed wing and multicopter aircraft. This combination makes the Quadplane more efficient than fixed wing and multicopter in general. This tool has the capability of vertical take off and landing and a wide range of coverage at the same time, so it is suitable to be applied anywhere, because it does not require a runway.

Team Leader Adam Ultansyah said, “This Quadplane will be able to conduct video monitoring in real time to detect crowds of people. After seeing the violations of the crowd of more than five people, this tool will issue an appeal to immediately disperse. Quadplane to be produced has an advantage compared to drones in general because it can work autonomously by minimizing the role of humans in their work. This unmanned aircraft only requires battery installation and determination of the Quadplane path to be traversed. This tool is estimated to be able to fly with a radius of 1km x 1km with flight hours 20-30 minutes disposable.”

Thanks to its innovation, the Hybrid Quadplane UAV was chosen to be one of the projects in the “COVID-19 INA IDEAthon” event which received funding from RISTEK-BRIN. There were 5590 idea proposals submitted to the committee, and only 17 teams were selected after going through a rigorous selection and presentation in front of national reviewers. One of them is the UI student team. The construction phase will last for 4 – 5 months.

University of Indonesia Vice Rector for Academic and Student Affairs Prof. Dr. rer nat. Rosari Saleh said, “We really appreciate the enthusiasm of UI students to keep innovating and creating even from home. In the midst of situations of social restrictions for COVID-19 countermeasures, we always urge students to remain productive and still have skills and skills. UI student innovation is also evidence of UI students’ concrete actions to support the government in overcoming the COVID-19 outbreak. ”