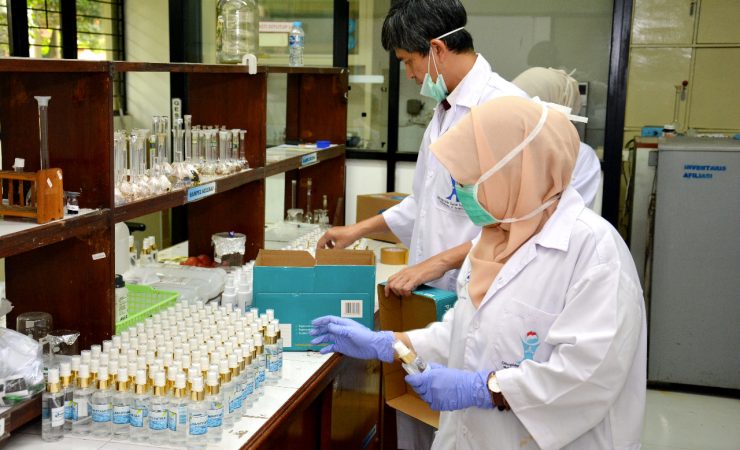 The Faculty of Mathematics and Natural Sciences (FMIPA) UI through the Department of Chemistry and the Chemical Student Association (HMD) in collaboration with the Alumni of FMIPA UI again distributed hand sanitizers for free, in a community service program.

However, the reach of the distribution in the second phase is wider, besides being distributed to units within the UI and the general public, distribution is also focused on helping to improve services and prevent the spread of the Covid-19 outbreak in several health service facilities such as hospitals, Public health center, and health clinics in the Depok city and surrounding areas.

Dr. rer nat. Budiawan as Head of the Department of Chemistry at FMIPA UI explained that there were at least more than 6 health care facilities that had received hand sanitizers produced by the chemical department of FMIPA UI, consisting of clinics, Public health center, and hospitals with a total of 54 liters.

As for the general public, hand sanitizers that have been donated reach a total of 1,500 bottles measuring 100 ml. Distribution to the general public including merchant and online motorcycle taxi is done directly or through public facilities.

He also said, at least there will be 60 liters of hand sanitizers which will soon be donated to other health service facilities.

“The agenda of production and distribution activities (hand sanitizer), we expand so that the benefits can be felt more broadly both for individuals or the general public to the public health center and even Brimob Command Headquarters, according to the number of distribution targets, of course,” said Budiawan.

The Dean of FMIPA UI Dr. Rokhmatuloh, M. Eng., Said “The FMIPA UI academicians who in this case are faculty managements, department heads, lecturers, until students and Alumni work together to contribute to helping prevent the spread of this epidemic, we are doing this preventive efforts as a manifestation caring and humanity “.