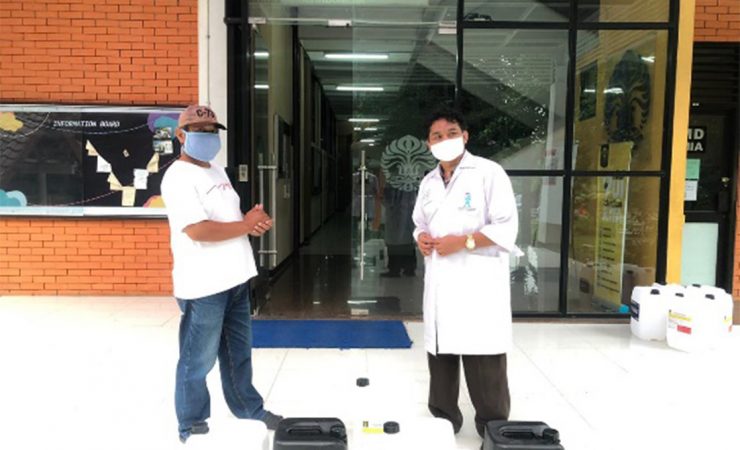 FMIPA UI Department of Chemistry as a tangible manifestation of community service in the pandemic covid-19 era in collaboration with the University of Indonesia Alumni Association (ILUNI UI) free production and distribution of disinfectant fluids to several villages in the city area of ​​Depok, West Java.

The production activities began on April 14th, 2020 until this week, in the Inorganic Laboratory of the Department of Chemistry FMIPA UI, involving several teaching staff, students, and UI alumni. Whereas distribution activities are carried out twice a week from April 14th to May 29th, 2020.

Dr. Agustino Zulys, one of the lecturer at the chemical department of FMIPA UI who was involved in this activity explained that this collaboration was carried out with the initiation of ILUNI UI, which was previously donated in the form of Oxonia concentrate of 2 jerry cans, each with a capacity of 20 liters from Ecolab, an international company engaged in the production of special chemicals.

Oxonia is an antimicrobial agent for use as a sanitary liquid. In the production of this disinfectant, Oxonia concentrate is mixed with water material for dilution up to 4000 liters.

This oxonia material contains PAA Peroxo Aceic Acid, acetic acid and water. The function of Peroxso Aceic Acid is as a disinfectant that can damage the protein tissue from viruses, bacteria, and fungi, so that viruses or the like cannot develop and die.

All ingredients that have been mixed are then packaged in 20 L, 10 L 5 L and 1 L. spray bottles and ready for distribution.

Distribution is carried out directly and for free by the ILUNI UI team to several villages in the Depok area, West Java through the Head of the Neighborhood Association (RW) of the region. Among them, Kelurahan Beji, Kelurahan Kukusan, Kelurahan Pondok Cina, Kelurahan Abadijaya, Kelurahan Kalibaru and Kelurahan Bakti jaya. Each village received 1 jerry can with a capacity of 20 liters.

“Actually, we open requests to Depok areas, especially in districts close to UI. Most of the requests that come in are indeed from RW / communities especially those in the region that have positive Covid-19 “. Said Dr. Agustino Z. in an interview with the FMIPA UI PR team through the whatsapp application.